Hi peeps! I’ve got another tutorial for you today, and it’s all about using a really flippin’ useful set of free, open source scripts called Builder’s Buddy to pack up a home or any other big, multi-linkset item. 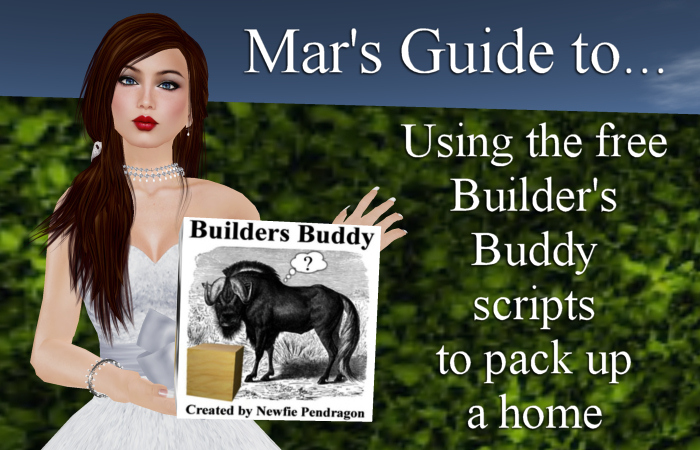 First of all, you need to get a copy of the Builder’s Buddy scripts. I suggest visiting one of the New Citizens locations (I use the one at Baileya because it’s usually quiet – here’s a direct SLurl to it). Go up to the big freebie board and click the Search button (arrowed) at the bottom. When it prompts you for a search term, type the word BUDDY into open chat: 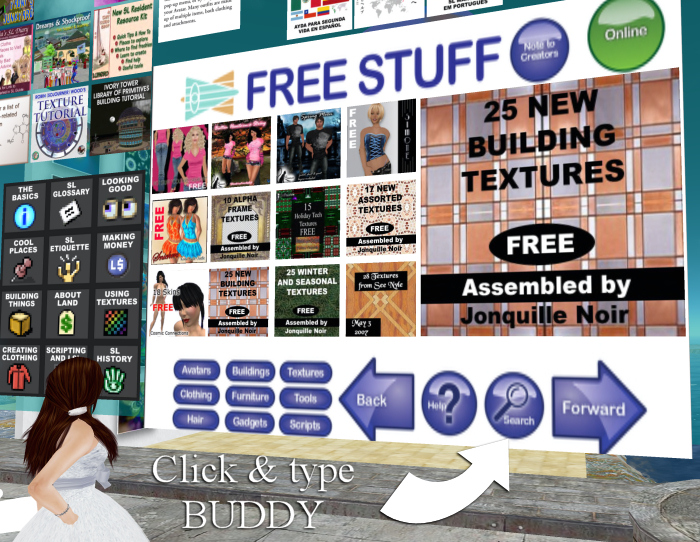 After a few seconds, all the images will fill up like this. To get your copy, just click the big image. You’ll need to unpack the box you’re given before you can use it. 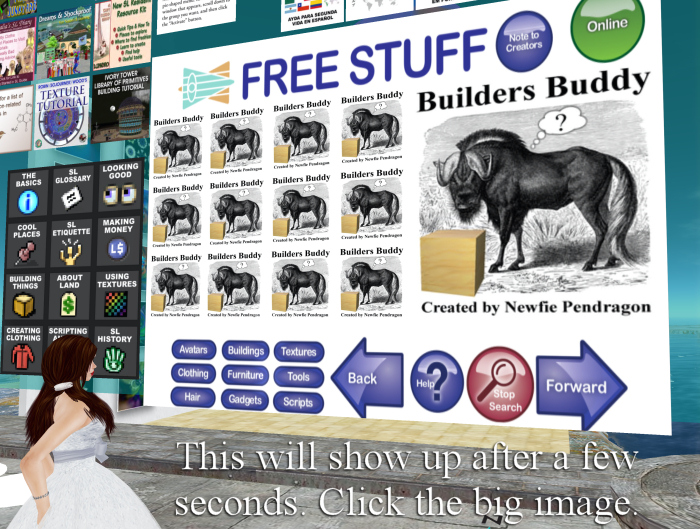 Now make your way to where you have the build you want to pack up. There’s a tutorial notecard included in the Builder’s Buddy folder if you want to have a practice run first, but hopefully this screencapped tutorial will show you what to do if you get stuck. It’s really very easy!

First, rez a box and give it a name. You’ll want to call it something memorable, as this is the name your packed-up build will have in your inventory. Mar called hers Rez box for my home. She also put a nice crate texture on it. 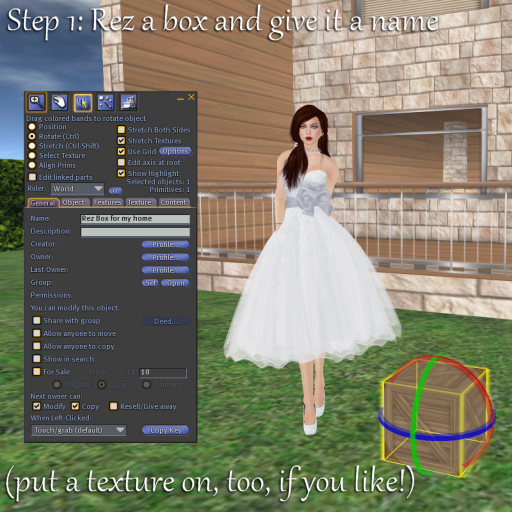 Now look in the folder where you unpacked the Builder’s Buddy. Inside you’ll see an object, three scripts, and two notecards. Put the script called builders buddy base into your newly-rezzed prim. 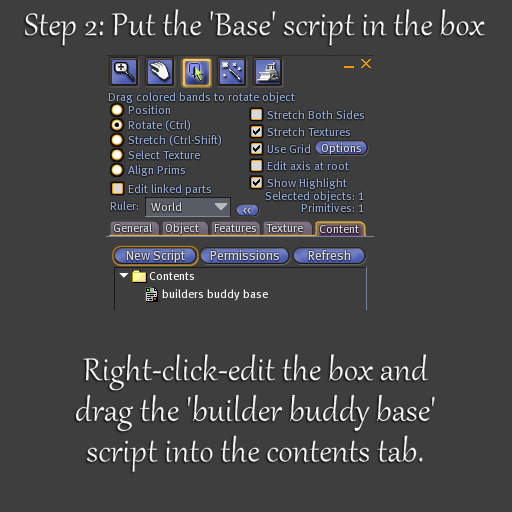 If your home (or other pile of stuff you want to pack up) is in bits and doesn’t have names, give them all names. Mar linked her house into several sections (linksets): the house itself, the fireplace, the fire, the door, and the three sets of windows. 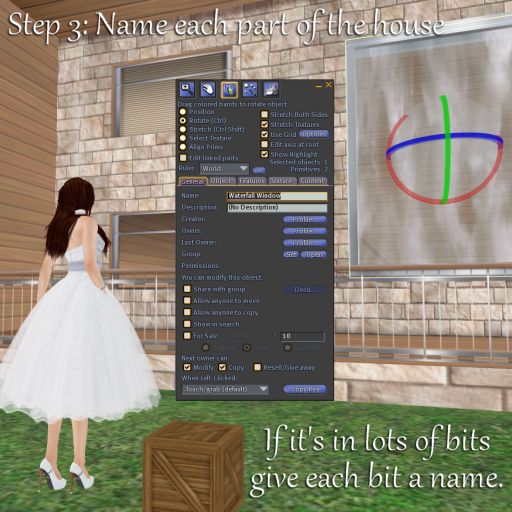 Now put the builders buddy component script into each of those ‘bits’ or linksets or objects. Note: you won’t be able to do this with No Modify objects, I’m afraid. 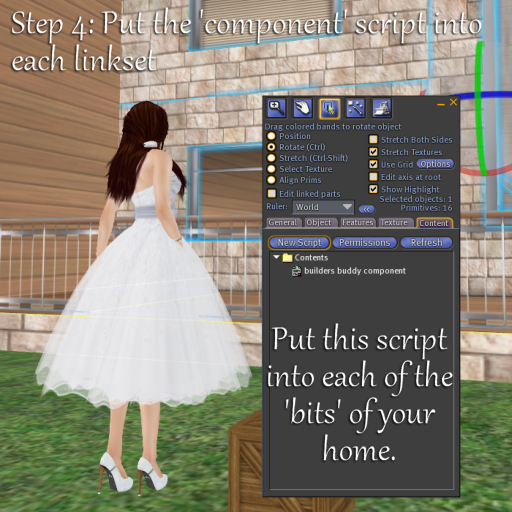 Go back to the prim you rezzed (the one with the builders buddy base script in it) and click it. On the menu that pops up, click the ‘record’ button. You’ll see some swirly lights, and some text in chat that will list all the pieces and that they have been recorded. Glance over the chat to make sure all your named pieces are included (this is why I told you to name everything!) 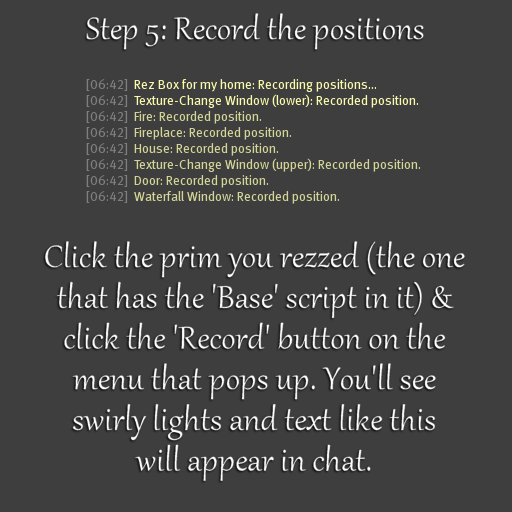 Now, take copies of all the parts of your building. If some or all of it is No Copy, just take it into inventory. I only suggest that you take copies initially, because until you get used to using the Builder’s Buddy it’s good to know your building or heap of objects is still sitting safely rezzed-out and properly-positioned! 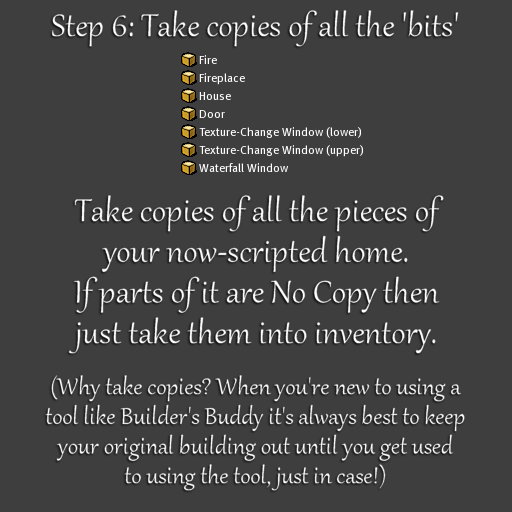 Go back to your ‘base’ box and drag all the bits/sections that you just took back out of your inventory and into the base box’s contents. 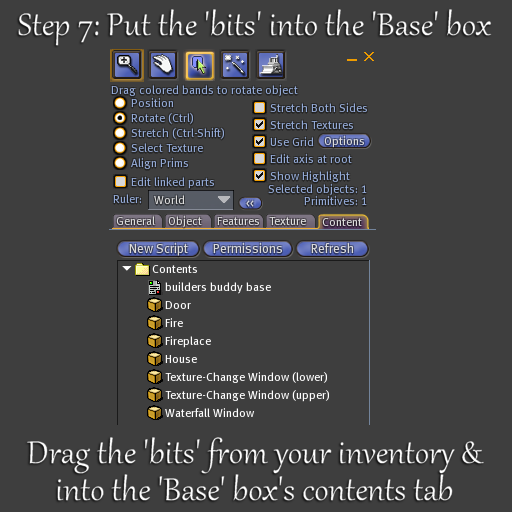 Take the ‘base’ box into inventory and (if you have the prims to spare) try rezzing it right now. If not, take it to a sandbox. I’ve written an equally-thorough tutorial on rezzing a Builder’s Buddy package, here. Please make sure you read that post before you try to rez, because Builder’s Buddy doesnt work quite like the other instant-rez boxes, such as Rez Faux and Rez Foo! 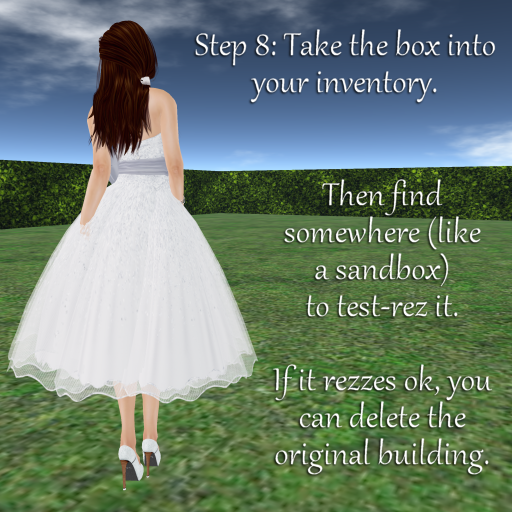 If it’s all okay, you can delete your original building or pile of items, safe in the knowledge that you’ve got them packed away in an easy-to-rez box. 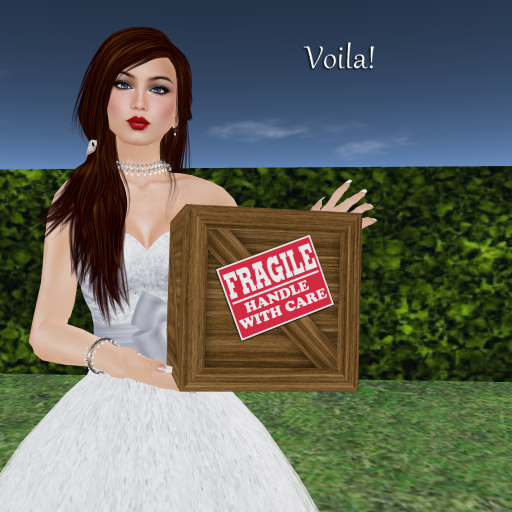 Tutorial: How to rez an object that’s been packed using Builder’s Buddy scripts