There is a very large freebie culture in Second Life, and many blogs (such as this one!) are dedicated – or partially dedicated – to writing about it. There are also some unspoken rules – the do’s and don’ts of freebie culture – which most people in the ‘freebiesphere’ adhere to. However, a few do not.

Just because a rule is unspoken that doesn’t mean it should go unheeded. And, if you think, “Who is she to tell me what the rules are?” then I only have this to say: they’re not really even ‘rules’. They are, in the main, simple and common courtesy. 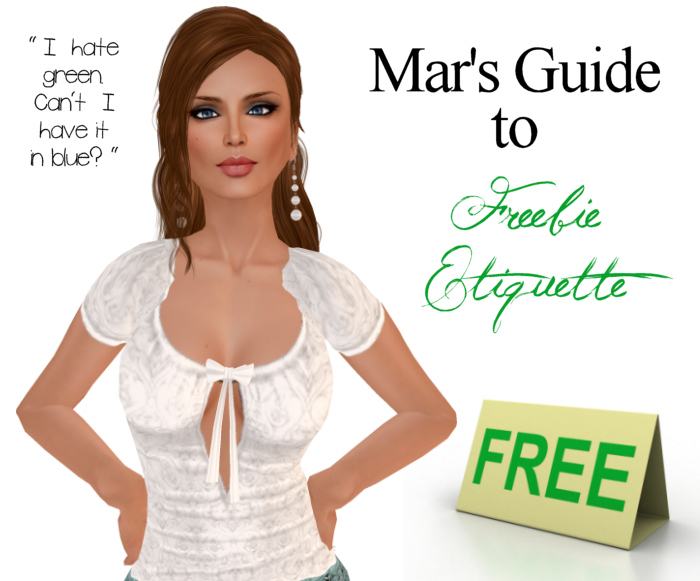 Hop behind the cut for a few do’s and don’ts: the basics of Freebie Etiquette :)

Firstly, let me let you into a little secret. The main reason why creators give away things for free… is because they want you to return to their stores and spend money there.

*GASP!* How horribly mercenary of them!

Yes, of course, there are not a few wonderful philanthropists in Second Life. There are many great free avatar kits available that are offered for no reason other than the store’s creator wants to help out newbies, possibly in the same way they were once helped (or, sometimes, because they weren’t helped and they don’t want other newbies to have that experience).

But in the main? They would really love for you to see the quality of their freebie and remember their store when you eventually decide to buy a full-priced version of something. Those creators have overheads: the land tier, the cost of textures, scripts, sculpts, advertising, etc. If nobody actually buys anything from their store, they can’t afford to keep it open. They’ll shut up shop and, eventually… no more freebies.

Second Life is a business for these people. Linden Lab have systematically borked Search, have driven traffic to SL Marketplace (where they get a cut of everything sold – did you know that?) and have done many other things that have made it increasingly difficult for merchants to keep a foothold for their in-world businesses.

Just bear that in mind as you read the following post, and next time you feel like doing any of these things, stop and remember it.

1. You got it for nothing, so don’t demand something else.

What do you mean, you don’t like the freebie because it’s green? You want it in blue? Sure! The blue version is right over there, at full price. What’s that? You don’t want to pay full price; you want the blue one free?

Well guess what? The creator has given you the green one free. Because she loves you? Maybe, but more likely she knows that’s the colour that will sell the least at full price, but she still wants to give you a sample of the quality of her work, in the hopes that you will pony up and buy the blue version if you like it enough.

2. You got it for nothing, so don’t blog that it’s horrible.

Why would you even do that? Don’t like it? Chuck it away! Maybe the creator has only just started out and is still learning. If you’d paid L$500 for it and it was crappy, then you might want to have a discreet word with her about lowering her prices while she’s still getting the hang of making stuff. But why waste your energy on blogging a freebie you don’t like? Use that time and energy to blog about something you love.

3. Doesn’t matter that it’s free, it still costs the creator time and money to make.

Yes, of course that skin designer has the time to make you a custom skin, absolutely free. I’m quite certain they have a spare couple of weeks to tailor something perfectly to suit you and then give it to you for absolutely no remuneration whatsoever.

Are you kidding me?! Well no, you’re probably not. I read a forum thread not too long ago where someone was asking for a custom skin and shape, FREE.

People, these things cost time. I’m probably being conservative there, by saying it would take a couple of weeks. A custom skin from scratch would probably take months of work, and you expect someone to put in all that work for nothing? Would you expect someone to build you a house in real life for nothing? Of course not. Remember: this isn’t a play world with play money.

4. Was it a limited-time offer that’s now finished? Don’t demand that the creator gives you a copy because you missed it.

You snooze, you lose. The creator put it out for a limited time and the offer is now over. Don’t bug them because you didn’t manage to grab it. Just shrug your shoulders and maybe join their update group or Subscribe-O-Matic so you don’t miss alerts of future offers they give out.

5. The couple of minutes you take to write a ‘thank you’ notecard can make a creator’s day.

It’s something of a thankless task being a merchant in Second Life. The only time most people think to contact a creator is when something goes wrong. Imagine what it must be like to only ever hear negative feedback for something you’ve made, even if that feedback is only, “I bought this skybox, how the hell do I get in?!” or, “I bought this on SL Marketplace and your store didn’t deliver it!”

Every now and then, when you find a freebie you like (and this goes for anything you find that you love in-world, not just freebies) take the time to write a quick little notecard to the creator and drop it onto their profile. Thank them for the freebie, compliment them on a really fun store build, tell them you loved exploring the sim they’ve created; anything that’s just nice and out-of-the-blue. Trust me: they will love you for it. It will encourage them, and heck knows, SL’s merchants and creators need all the encouragement they can get!

6. When you have some money, remember their store.

Remember that gorgeous freebie gown that Fabulous Frocks Store gave away in red for Christmas last year? Well, when you have that in-world wedding to attend, remember Fabulous Frocks Store and hop over there to see if they have something in a more suitable colour that you can wear to the event. You know the quality of their work is good, so give them your patronage. It is, after all, one of the main reasons why they offered that Christmas freebie in the first place: to get their name out there.

This is pretty much what 1 – 6 up there boil down to. There are real people on the other side of that computer. Fabulous Frocks Store isn’t some massive conglomerate or faceless department store. It’s probably a 40-something wife sitting at home and getting to do something she never had the chance to do in real life – design and make clothing – and to make just enough money to be able to continue buying the textures and sculpts that help her continue doing what she loves, as well as hopefully enough to pay the tier on her store.

We’re all doing what we love in-world. Don’t spoil it for someone by being demanding and dickish. And try that thank-you notecard thing sometimes. You might be surprised at the response :)