This post is aimed specifically at people who use the Phoenix Viewer to access Second Life. If you haven’t heard yet, then I’m afraid that the beloved blazing bird is about to stop working. 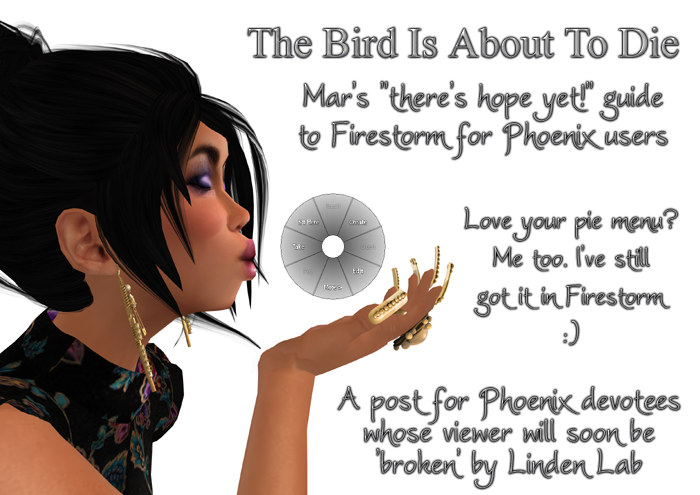 I don’t mean that the Phoenix Firestorm developer team have stopped updating the viewer (that news came a while ago, and you probably already know about it); I mean that – very soon – Linden Lab will be deploying new code to the main Second Life Grid, and that code will finally break the Phoenix Viewer (and other viewers that haven’t been updated to work with that code).

The code is called Server-Side Baking, and it’s a fix for a lot of long-term issues in-world. In very basic terms, what it will do is move the responsibility of ‘baking’Â textures onto the server and away from the viewer. This should fix a lot of rezzing issues, not least:

– Ruthing (rezzing wierdly, with ‘grown’ hair and boobs – even on the guys!)
– Rezzing as a cloud or egg and not being able to edit appearance
– You seeing yourself just fine while others see you naked

It’ll be fixing a lot of other issues as well, but those are the big avatar-related ones. But what it means is this: all viewers (both the official one and TPVs – Third Party Viewers) – have to update and include a lot of code in order to work with Server-Side Baking (SSB, for future ease-of-typing!).

So, what happens if you’re still using a viewer that hasn’t been updated when SSB goes live?

Hop behind the cut to find out. And, Phoenix users, this post is primarily aimed at you (I was one of you, once, and clung on for aaaages!) so you really should hop behind the cut. I have a pleasant surprise waiting for you behind there! ;)

NOTE: This is an image-heavy post. Open it, then go make a cup of tea while it loads!

END_OF_DOCUMENT_TOKEN_TO_BE_REPLACED

This post is for anyone who sells (or wants to sell) on SL Marketplace. The old method of selling (the magic box) is being phased out, and a new method (direct delivery) is bring brought in. In fact, all magic boxes will cease to work from Tuesday 16th April – that’s just a few days from now. So here’s a quick guide to migrating an existing magic box, uploading new items to direct delivery, and writing listings. 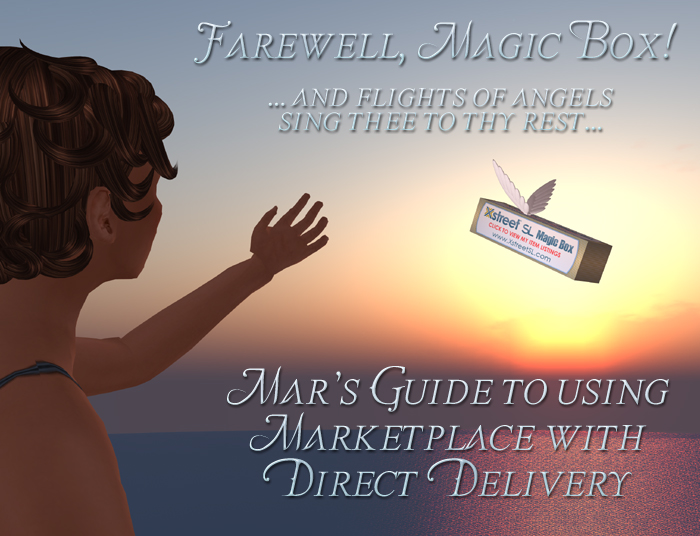 END_OF_DOCUMENT_TOKEN_TO_BE_REPLACED

It’s been a long time since I wrote my first Useful Gadgets post (in fact, it was so long ago that it was on the old blog!) but I’m back with another in the series, and this time it’s for something many of us use: teleporters.

This particular teleporter is not only completely free, it’s modifiable and very easy to customise. I use it at my home location, and I can set up each pad in a matter of two minutes. While it’s not as fancy as some of the pricey, networked pad systems you can buy, it’s still great for moving between levels in a store or between your land-based home and skybox(es)! 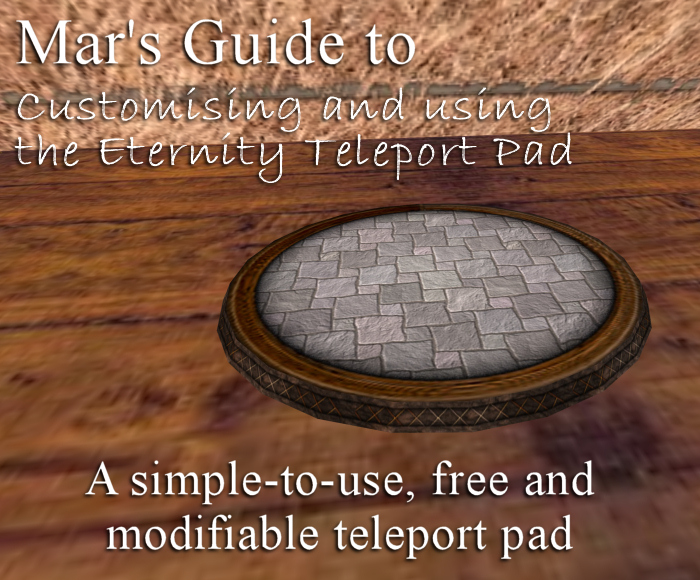